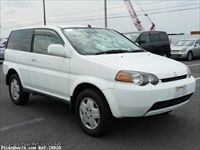 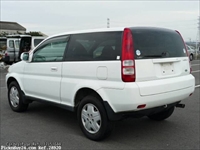 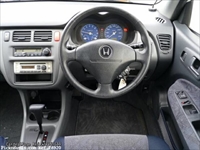 The HONDA HR-V was introduced as the second series of HONDA's J-Mover project, which emphasized the development of “joyful” vehicles. The HR-V officially stands for Hi-Rider Revolutionary Vehicle. The HR-V was built on the supermini platform used by the HONDA Logo, while the engine and drive system was built on the HONDA Civic platform, thus making its development an amalgamation of elements from various existing platforms.

The exterior had a front design that appeared grille-less, with quad round headlights installed. The vertical, large-sized tail lamps were another distinctive feature. The body size was made compact, measuring in length, width, and height at 3,995mm, 1,695mm, and 1,590mm respectively, but sufficient spaciousness was secured due to the tailgate that was designed to be nearly perpendicular.

In terms of the interior, two-tone colors were used, eliciting an air of lightness and comfort. For safety features, front seat airbags and ABS were installed on all vehicles as standard equipment.

The 3-door was the only body type made available.

Transmission options consisted of the 5-speed manual and CVT, and fuel consumption ranged from 13.6km/L to 14.8km/L, which were good figures based on the standards of the times.

In July 1999, a 5-door model with a wheelbase that was extended by 100mm and improved backseat riding comfort was added to the lineup.

In July 2001, minor changes led to improvements in the interior and exterior. The front bumper's design was changed, employing a honeycomb metal-plated design, and a front spoiler was added for a sportier look. For the interior, a newly designed meter panel, silver meter visors, and a black pearl center panel were installed as standard equipment, further emphasizing a sporty and high-quality feel.

Moreover, the engine variation was expanded, and the FF vehicle carrying a VTEC engine with 125 horsepower was added to the lineup.

In October 2003, the body type was consolidated to the 5-door model. In terms of the equipment, for the JS and JS4 grades carrying a VTEC engine, 16-inch aluminum wheels and front under spoilers were installed as standard equipment.

Furthermore, for the J and J4 grades, full-auto air conditioning and genuine leather steering wheels were installed as standard equipment.

NISSAN ATLAS (2t-4t): Which Version Do You Like for Used Car?

The Transformation of the Nissan Atlas 2t-4t Class First Generation H40 Model (1981 – 1992) The NISSAN ATLAS was released in December 1981 as the successor to the Nissan Caball and NISSAN CLIPPER. This H40 model was made available as a 2-tonner, 2.75-tonner, and 3-tonner. The outer design utilized quad round headlights, blacked out front grille area that enclosed the headlights, and a cab that emphasized a square structure. For the interior, the instrument panel was designed to emphasize sharp, straight lines. Another distinctive feature was the fuel indicator and water temperature gauge being positioned vertically next to a large-sized ... 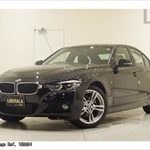 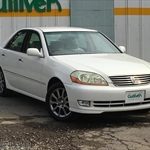 TOYOTA MARK 2: Which Version Do You Like for Used Car?

First Generation X70 Model (1984-1988) (For the wagon only, 1984-1997) The TOYOTA MARK 2 went on sale in August 1984, after it was officially renamed from its pet name until then, CORONA MARK 2, to MARK 2. Counting from the CORONA MARK 2 series, this is the fifth generation model. The body types consisted of a pillarless hardtop, sedan, and wagon (released November 1984). In terms of the hardtop, its design incorporated elements of the luxury vehicle, TOYOTA CROWN; for example, fog lamps were built into the front grille, and the C pillar was changed to a crystal pillar. For ... 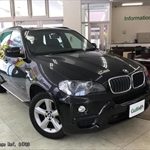