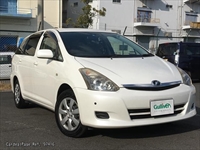 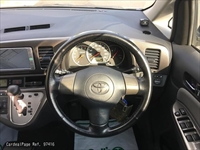 The first generation TOYOTA WISH was released as a 7-person 5 number size minivan in January 2003. It was developed based on the chassis of the TOYOTA COROLLA. Following TOYOTA's design trends at the time, a mono-form design that involved the roof line from the front to the rear being smoothly connected was utilized; combined with a blacked out C pillar, this made for a sportier look. As for the lights, vertical designs were used for both the front quad headlights and rear combination lamps, emphasizing an atmosphere of wideness and openness.

For the interior, a design that smoothly connected the meter cluster from left to right was used, and a gated instrument panel shift led to a more organized design. Moreover, depending on the grade, metal or carbon panels were used, further heightening an air of luxuriousness.

As for the seat arrangements, due to the flat floor, the second row and third row seats were able to be separated and folded down, allowing for many different seat arrangement options. Moreover, wide and spacious head clearance and leg space were secured. As for the rear doors, the opening was made larger, making for easy access to the third row seats. The second row seats were installed with double folding and reclining functions, and they had a sliding capacity of 195mm. Moreover, the third row seats could be folded down with one touch, allowing for easy and large storage space.
The body size generally measured in length, width, and height at 4,550mm, 1,695mm, and 1,590mm respectively.

The 1,794cc engine with 132 horsepower was carried; this engine was certified as a “2010 Fuel Consumption Standards Achieving Vehicle.”

This engine was combined with the 4-speed automatic transmission. As for the drive system, the FF and 4WD were made available.

In April 2003, additions were made to the engine lineup. The 1,998cc gasoline engine with 155 horsepower was added, and this was combined with the CVT.

In September 2005, minor alterations were made to the interior and exterior, and changes were made to the transmission as well. As for main changes made to the exterior, the headlights were installed with projectors, and the front lower grille design was also changed. The position of the rear combination lamps was also altered, leading to an air of novelty. 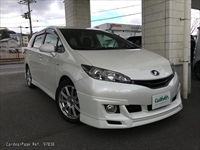 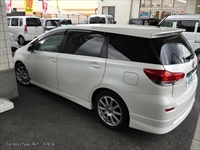 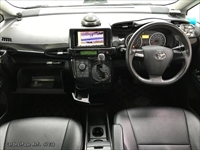 In April 2009, a full model change led to the Wish's evolution to its second generation model. The one-motion form and roofline were carried over, and in addition, horizontally expanded front headlights and a blacked out B pillar were installed, leading to a sharper look.

Moreover, in terms of the interior, SRS airbags, side airbags, and curtain shield airbags were installed on all vehicles as standard equipment, further enhancing safety features. In addition, usability was increased through changes such as an expansion of luggage space width and an increase in controls for the driver's seat lifter. More seat arrangements were made available as well.

These engines were combined with the CVT. For the drive system, the FF and 4WD were made available.

In December 2009, the engine lineup was reevaluated, and the 1,797cc engine with 144 horsepower achieved enhanced fuel efficiency. As such, fuel consumption for the 4WD model improved to 15.2 km/L, and for the FF model, 16.4km/L.

In April 2010, further improvements were made to the 144-horsepower engine; for the FF model, fuel consumption improved to 16.4km/L. As such, the model achieved certification as “2010 Fuel Consumption Standards +25%,” and it received 75% exemption from the automobile acquisition tax and motor vehicle tonnage tax in Japan.

In April 2012, minor changes were made to improve the interior and exterior. The designs of the front grille and lights were changed, and by enlarging the lower grille's opening, a wider and stronger design was achieved.
In terms of the interior, the materials used were reevaluated, leading to further improvements in quality and texture. 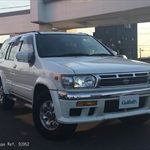 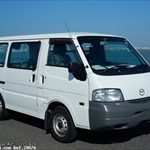 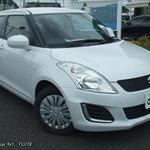 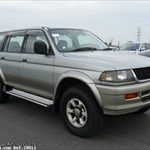 MITSUBISHI CHALLENGER: Which Version Do You Like for Used Car?

First Generation (1996-2001) The MITSUBISHI CHALLENGER utilized the chassis of the MITSUBISHI PAJERO long body, though it was released as a new vehicle by specially equipping the upper area of the car body. Compared to the PAJERO that it was based on, the car height was lowered, further promoting a sportier look that was in line with city use. The body size fit in the 5 number body category, measuring in length, width, and height at 4,530mm, 1,695mm, and 1,710mm respectively. For some grades, the over fender was expanded to 1,775mm. For the interior, there were two rows of seats ...