What happens if you put too much engine oil in your car?

There is a proper amount of engine oil.
What happens if you replace the oil yourself, accidentally putting more than the proper amount in?

The Role of Engine Oil 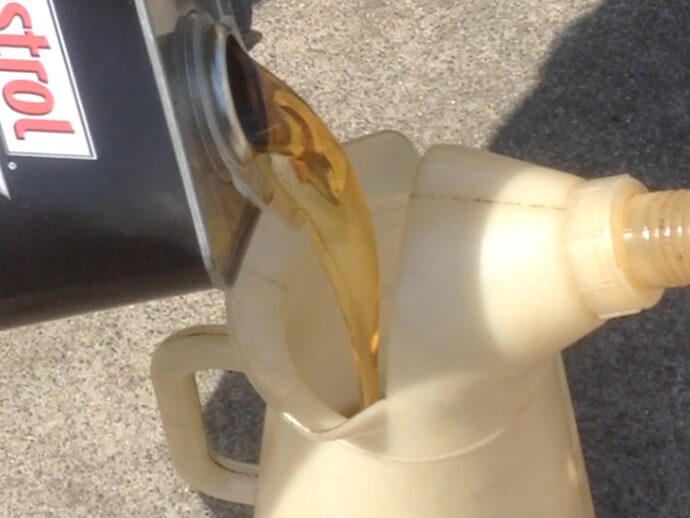 The role of engine oil is to lubricate the engine in order for it to run smoothly.
Besides this lubrication effect, it also has various other functions.

Basically, engine oil plays an important role in preventing trouble inside the engine.

What is the proper amount of engine oil 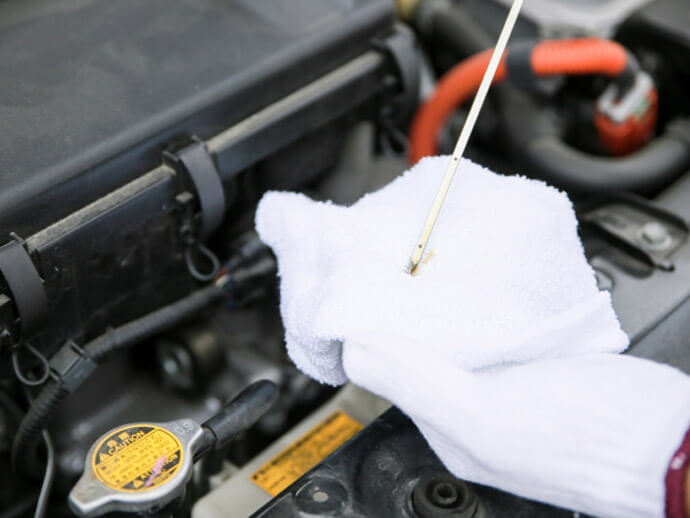 There is a specific amount of engine oil required. 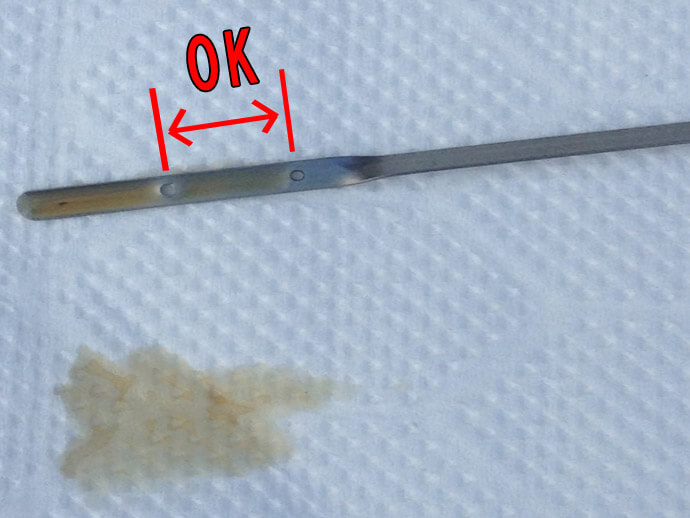 When pulling out this oil level gauge, you will see two lines at the tip, with holes in between, with “U” (Upper) and “L” (Lower) written near them.
These are the marks for measuring the amount of engine oil in the engine.

If engine oil is visible between these marks, it can be said that it is the proper amount, but if it is above the top marker, it means that there is too much oil.

Soon after the engine has stopped running, engine oil is still circulating throughout the inside of the engine, so if you check at this time, the amount of oil visible will be less.
It is necessary to check after all the engine oil has returned to the oil pan.

To do this, it is necessary to stop the engine and check it after a certain amount of time (5 to 10 minutes) has passed.

Before starting the engine is best if you can.

2. Check in a flat place

If the car is tilted, the oil in the oil pan also tilts, so you can not check the correct amount of oil.
Always stop the car at a flat place to check it.

What kind of symptoms will happen if there is too much engine oil? 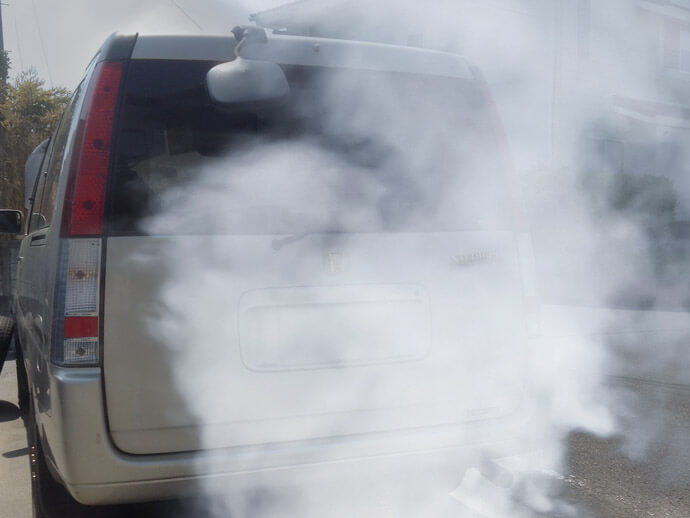 If you put too much engine oil in a car, symptoms considered are as follows.

If you leave too much oil in the engine, these symptoms will continue.

Also, in the worst case scenario, the engine will break down and overhaul and/or replacement will be required.

How to deal with too much engine oil 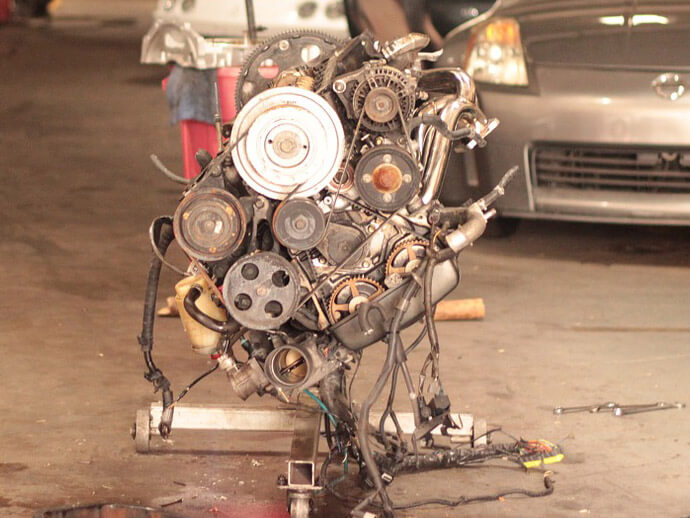 The only way to deal with excessive engine oil is to remove the extra oil.

How to withdraw engine oil

The following are methods for removing excess engine oil.

Pull out the oil level gauge, insert a pump into the hole, and suck up the oil

After pumping out a certain amount of engine oil, insert the oil level gauge and check whether it has reached the specified amount.

Remove the drain bolt in the oil pan at the bottom of the engine and drain the oil.

When removing the drain bolt and pulling it out, the engine oil comes out suddenly, so removing the plug gradually does not work.
After removing the oil, refill with the correct amount of engine oil.

Have a professional pull engine oil out

It is easiest to leave replacing the oil a professional.

Whether there is not enough oil or too much oil, not only will bad symptoms occur for the engine, but also in the worst case it will cause the engine to fail completely.

If you put too much engine oil in, do not leave it. You should deal with it immediately and return it to the proper amount.

The Easiest And The Best Maintenance For Automatic Transmission Fluid

How to Check a Car that won’t Start?

There are often times when your car just won’t start no matter what you try. You simply don’t know what went wrong, whether you left the radio or the lights on mistakably or could it be a more serious problem. Regardless of your oversight, you now that your battery is dead, but there may be other reason that have contributed to the case. The following paragraphs outline the common reasons why a car won’t start and give you the best possible solution to get it up and running again. When you turn the car on and it is silent, you ...

10 Affordable Ways to Improve your Car

Every car owner around the world wants to modify his/her car after a certain span of time. If you have the same desire, than there are two ways of going about it. You may opt for the expensive professional services and get the car modified. Or you may get your own hands dirty and truly call your car "my own". Doing the car improvement tasks yourself can be very pleasing. Though you might be smeared with mud and grease after the job, but you have saved lots of money with this little discomfort. There are many car improvements you may ...

How Much Traction Do You Need: 2WD or 4WD?

People wrongly believe that with 4WD, all the 4 wheels of the car runs and turns with the same speed simultaneously. When a 4 wheeler takes a turn, the inside tires spin with a lesser speed than the outside tires. Mostly vehicles come in two wheel drive that is 2WD. In 2WD, the engine power comes in either the front two wheels or the rear two wheels. Many vehicles such as the cars, wagons and the minivans come with 2WD because they are space efficient. The engine place is very small in such vehicles and there is more space in ...

How To Protect Your Car Body From Scratches?

Seeing the first scratch on the brand new car will tear anybody’s heart apart. It’s definitely not an impossible task to take care of your car’s finish. If you want to be the owner of your car, you need to take care of your possession thoroughly. Regardless of the age of the car, taking care of the car’s exterior finish is one of the essential lessons to understand about being the owner of the car. You might need to set apart a whole day for this job. Although it might not take a whole day, you can always rest on ...

PREV
What do 1DIN and 2DIN mean in Car Navigation systems?
NEXT
Let's understand how to use each gear of a manual car