It is always said that no two people even if belonging to the same family are similar. Here is another example of two cars from the same parenting house Toyota. Emerging as one of the main quality car manufacturing companies of Japan since many years, Toyota has created an image far beyond excellent in the field of Automotive.

Toyota launched its first kind Land Cruiser in November 1984, a cheer to all the off road lovers. This version had a short body with options for Customers to have either a soft or hard roof shell. The proto version of Prado had short wheelbase and was a two door smaller Jeep with diesel engine. With time, emerged the present day Land Cruiser Prado, available since 2009 and till date fascinating all those rally crazy people! Prado is known to be the style statement for most of car lovers. Prado is available in a 3 doors and 5-door format with features like the 4WD and an array of electronic gadgets attached to it. So if you are a gizmo freak, Prado can be your toy to chill out and have real crazy fun.

Another feather to its wings back in 1980, Toyota also launched its Hilux Surf model under the name of Trekker. As the name suggests this model from Toyota provided its lovers the fun of trekking from wheels. This later evolved to the present day 5th generation Hilux Surf that is available since October 2009. Till today there is no Hilux Surf counterpart, which has listed for Toyota Japan lineup. The original form of Hilux was like the two door pickup truck with fiberglass shell; however with time this underwent a series of modifications and independent development to make it a mid size off road vehicle. The moment you enter a Hilux it just provides a sense of adrenaline in your stream. Although it can be very well said that the first two generations of Hilux were derived from the pickup truck ranges of Toyota whereas the third and fourth generations of Hilux were effectively restructured forms of Land Cruiser Prado.

The Toyota Hilux and Prado are biggest selling vehicles in their classes and neither is it surprising that dual cab versus wagon question evolves around these two mainly very often. The Land Cruiser is a mid spec model whereas the Hilux is a top end spec, nearest equivalent being the Prado top version. In terms of the equipment Land Cruiser Prado provides the luxuries of leather seats, satellite navigation and safety kit mechanism like the stability, traction control. The Toyota’s Prado and Hilux share suspension, safety and engine very much in common line. Prado enjoys a full time 4WD with torque sensing differential mechanism.

Hilux is a choice of many who want to utilize part of their cabin spaces and rest open hood behind for various activities. Hilux provides an excellent base for carrying space and is a hit for those off roaders who live in farms and hills. Hilux is a hit if you are in need of a load carrier vehicle which suits all needs of those who need power and load requirements off road.

Apart from the fact that the Prado allows eight seats, Hilux has an advantage of providing five with tons of loading space as add on to its luxury and style. So whether you need an wagon to move along with your family and friends over an exciting off road ride or need a professional load carrier with all the abilities to move your business from and to off road. The Prado and Hilux from the Toyota provide you the best options with luxury, style and ultra comfort. 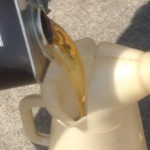 What happens if you put too much engine oil in your car?

There is a proper amount of engine oil. What happens if you replace the oil yourself, accidentally putting more than the proper amount in? The Role of Engine Oil The role of engine oil is to lubricate the engine in order for it to run smoothly. Besides this lubrication effect, it also has various other functions. Specifically: It maintains airtightness between the piston rings and the cylinders, preventing explosion and compressed gas from escaping. It absorbs and dissipates heat generated from the engine It removes sludge and soot etc generated inside the engine It prevents rust from dew condensation inside ...

Most of today’s manufactured vehicles come standard with some type of anti-theft device even the base versions. These devices not only offer overall protection for your vehicle, but also play a significant role in lowering your insurance premiums. Apart from the factory installed anti-theft device, you can always add aftermarket systems, and the more you have, the lower the insurance premium. This is simply because the substantially high rate of auto theft, which costs insurance companies a fortune and even higher than regular car accidental damage. So the concept is simple, the more you anti-theft devices you have installed in ...

How to tell when my vehicle is due for a brake job and what parts are replaced during it?

There are a number of reasons for getting a brake job, but all of them have something to do with wear and tear as indicated by the vehicle manufacturer. Most manufacturers suggest that your brakes or their relevant components need to be replaced when the brake linings have worn down just past their acceptable thickness, but it is recommended that you check your owner’s manual to confirm. Regardless of what the owner’s manual states, the only way to check the brakes of a vehicle is by inspecting them in a garage and not at home. Other indications that it’s time ...

Useful Advices to handle your used car well. Is there a Difference between Premium Grade and Regular Fuel?

Even in these times of high fuel prices, filling up at the cheapest petrol station could put a dent in your pocket, and that’s just for regular fuel. Then there are those consumers who continue to pump premium fuel in these unfavorable economic conditions so the question remains; is there a difference between regular and premium fuel? Does premium grade give you more mileage or does it boost the life of your vehicle? Is it worth it? Being educated about if premium fuel is simply recommended or is it really needed will help you make the best the decision on ...

PREV
What is The Differences between Daihatsu Terios and Toyota Cami?
NEXT
Tips to Wash and Wax Your Old Car